Unexpected birth stories usually tell the story of a birth before its time, or the story of somebody not knowing being pregnant.

Laughing about the last one? It happened, say thanks God it wasn’t you. I know of two situations.

I have discovered, live, another type of unexpected pregnancy and birth: the true story of my delivery. 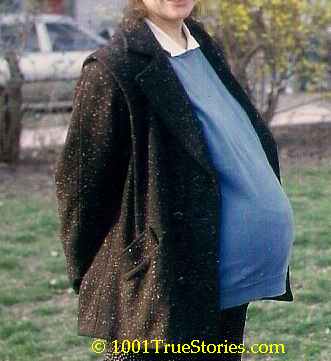 Our (I admit, my family plan, my husband simply agreed) was: first child born in Pisces when we were 28, and the second one also in Pisces but 4 years later. I have read somewhere that Pisces kids are relatively easy to educate in comparison with others. Myself being an example, knowing also of others, I thought I had enough of evidence to trust it. I also like the Pisces nature.

As for the 4 years between them... People who are 4 (or multiple of 4) years apart have a good basic understanding of each other, the Chinese horoscope says. So why not maximize the mutual understanding of all of us?

My husband didn’t care about astrology, so he said also OK.

I was a slim tall girl and not by the usual 4 months, but with already with 3 months the pregnancy was very obvious. The belly was growing fast. Very fast. People asked me "4 months and already that big?! Aren’t they twins?!”

"No, it cannot be", I kept on saying. "We don’t have twins in our families. Besides both me and my brother were big new-borns, both around 4 kilos and half."

I remember sitting in an armchair, sticking to its back, and with the tip of the belly reaching exactly to its outside margin: about 60 cm away!

We even almost had on mom’s side a "monster sized” baby. It was between the wars. Somebody in the family of my grandma in Bucharest couldn’t deliver because he was too big. Mom told me that toward the end of the labor all the gynecologists of Bucharest were there around her. In spite of that, the question the husband had to answer was whether to save the mother or the baby. The baby-boy would have started his life very healthy and with a proud weight of more than 6 kilos. May God rest him in peace...

We prepared our new extra room for the baby, buying or borrowing things. My husband asked at work about a baby bed. Two co-workers each offered him their outgrown babies’, he chose one.

We also bought a car with three doors, thinking it would be enough for the next 4 years until the second baby would come, and then change it for a five doors one. We moved from our one room appartment into a two room one, which would be, again, enough; then baby clothes or its carriage, as well as all kind of accessories and things one has to purchase and settle during pregnancy... Yes, I remember us thinking several times about many things being sufficient "until the second baby comes”.

Fast forward to the labor pains and the dreaded moments of laying in the delivery room. It was not nice. It was not as bad as some stories I had heard of pictured it - but not nice either, as other stories had it. However, everything went by the book, as in the birth’s instructions manual. We had a boy and I said to myself, Thanks God is over.

Over? The delivery nurse was pondering. The boy was rather small, below 3000g. That huge belly would have then yielded :) much more amniotic fluid. Are you sure you don’t have twins?

"Why, I've done two echographies, and they haven't shown anything! They even said I would have a boy!”, I said, ...

... And refrained from telling her about my profound distrust in all this modern medicine props, be it devices or medicine. They fill the world with it, and after 6 months or 10 years they say simply Oops (not even "Oops, sorry!”), and take it back. Think Contergan / Thalidomide. Think the statistically established third cause of deaths in the States: medication...

I have given birth in Austria. In spite of speaking very good German, it was obvious upon my name and accent that I was not a native Austrian.

"Where have you done the echographies?”, asked the nurse.

Oh, that barely dumped superior smile I knew so well. We, from the Eastern countries, were not supposed to know much about such err... progress.

I would have loved to tell her this medical story here...  I bet any of the high nosed doctors in any very developed country wouldn’t have made it. They rely already too much on machines and have mostly lost the feeling for the patient. I was not in mood to tell it. Instead I only somehow uttered...

"First echography was by my physician. The second one was here, in your hospital. I have also come to all the appointments and controls you have called me.”

Silence. I played my last card. "It cannot be twins. The pains are gone!”

In between, from somewhere, doctors started to pour into the room. Before our boy came into this world, there had been only my husband and the delivery nurse in it. Now, wherever I looked, 360 degrees around me, my eyes stopped into a white gown bent over me. Uh-oh...

"It cannot be that I have twins. I have no more pains!”

Somebody finally heard and soothed me.

"They’ll be back in a few minutes!” 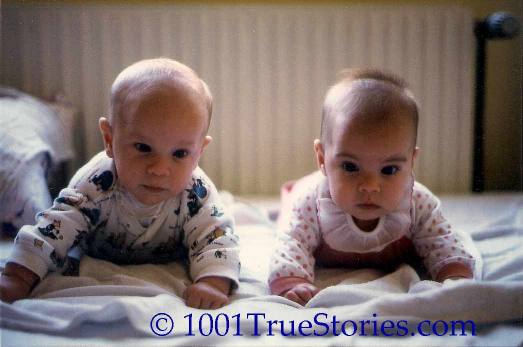 In 27 minutes we had two of them. Two!! This time it was a girl. We were shocked. One of the biggest shocks of our lives.

All together 5 kilos sharp.

Next day my husband called the other co-worker: Is the baby bed still available?

A cheer-up for mothers with underweight new-borns: ours both developed very harmonic and had never been seriously ill beyond the mandatory child diseases (… and except for this strange appendicitis of my son I’ll talk about some other story.)

... aiming to that superior "Where have you done your echographies?”

Never behave this way, folks. You are bound to finish up like my delivery nurse. Not only did her hospital – still, one of the oldest and maybe the most famous in Vienna – had screwed it up by not properly counting to 2. In the same time with me there was another woman who "came" with twins and left with triplets!

Upon my unexpected birth story I've heard about another one which allegedly was in the news by that time. In Turkey the gap between the delivery of some twins has been not 27 minutes, as in my case, but of about two weeks. If I remember well it was the first one now and the second one in the New Year!

Imagine what I’ve read on the thank-you cards from former fresh mother, exposed on the corridor walls outside my room. A woman was grateful for the hospital best assisting her with her twins.

… Now, I was huge, barely moving and sleeping with 5 kilo of babies inside. I wonder how it has been for that woman…

She had given birth to twins weighing together 9 kilos sharp!!!