A Child´s Funny Answers on the Phone

Madalina Frantiu is the daughter of an important personality in her city and county in Romania. She got used from an early age with continuously ringing phones (and recently cell phones) asking for Dad.

She is very much a direct girl, even now, as an adult. But, while now I guess parts of her directness get lost under the adult politeness, as a child it was totally unvarnished. As you may suspect, it sometimes did bring some awkwardness for her parents...

Like the situation when they were almost ready for the week-end driving to the place their parents, i.e. Madalina’s grandparents, were living. While being about to finish the tedious preparations, somebody dropped by. He did notice there was something going on and asked

"Am I disturbing, maybe?” The parents were of course polite and denied it. But little Madalina said in a very outspoken manner, literally:

"Yes, you_do_disturb!! We were about to leave to our house on the countryside!"

I had started my stories about her thinking actually about some of her answers on the phone. As a little introduction: in Romania the person being called does not answer by telling her name, as customary in Europe and not only. In Romania you just pick up the phone and say "Hello!”, and then the person who’s making the call asks 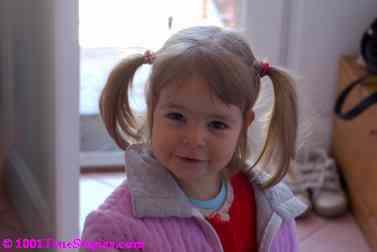 Now, maybe you have noticed: Madalina’s last name is Frantiu, and she was sometimes asked, like in this story here, whether it was Frentiu family. Frentiu is the basic family name where from the very unusual Frantiu version has been derived. Much to Madalina’s chagrin, not all people notice the small difference in pronunciation, which in Romanian is however more obvious than in English. She knew she was a full-blood Frantiu, hence people calling them should also know it.

So, as little as she was, she used to simply but very resolute answer

... Without further fuss hanging up the phone after that.

Or, there were people asking

The little child voice was answering "No, he is not.”

An adult would have understand the „subtitle” of the question: when does Dad come back? A child is not supposed to be good in approximating time, so the adult aimed at overtaking this computing work.

But little Madalina didn’t get the subtitles and took the question as it was. What people calling them were also about to find out soon was that, in spite of being little, she had a good feeling about what was fair and what was not. Her usual answer for that, uttered of course in her sweet little child voice, was

And bang!, phone again hung up.

Her maybe best-of-breed funny answer happened however only once, parents say. Phone ringing, Madalina answering it, the distant voice asking the question she heard some thousands of times:

"Is Daddy home?” Madalina took the phone away from her ear and asked loudly