This is the only true ghost story I do publish, because it’s not heard, it’s mine. I have lived it at the beginning of 1992, in the mountains. Because of it I have never visited again the hut I am so fond of, the Podragu Hut.

The Podragu Hut (Cabana Podragu) is situated in the Fagaras Mountains at 2136 m. in the Podragu Valley. It’s only a good 4 hours hike away from the highest peak in Romania, Moldoveanu, 2544 m. It has around an absolutely great scenery. 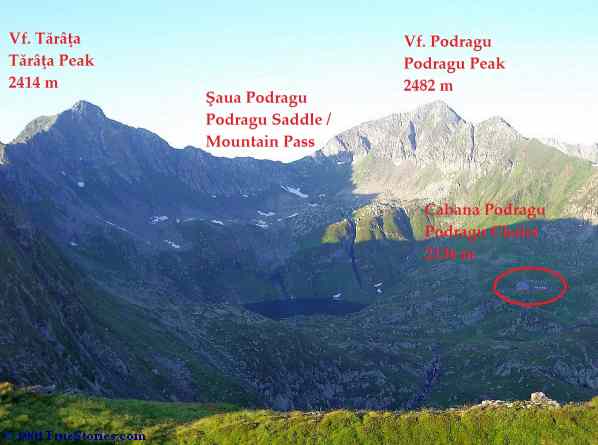 In winter and from the Podragu Saddle it looks like this 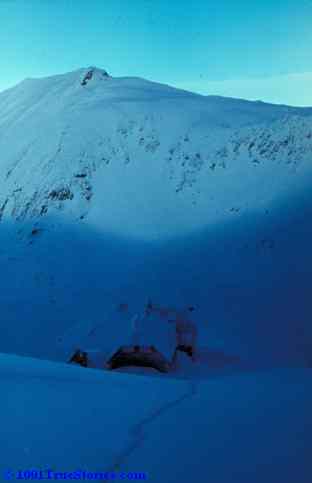 Podragu Valley is already above the fir-trees forest and also above civilization. They say that, once upon a time, the hut even enjoyed electricity. There must be something true in it, the sockets are still there :). It also had once a bathroom, with sinks and so. They are also still there, as archaeological relicts. Have you ever heard that little word, progress / development?

At least at the moment I still used to visit the hut, we had to fetch our water from a well some 100 m away from the chalet, coming directly from the mountain. Both water for washing and for drinking.

The well of this water stream, some hundreds of meters above, was our drinking source and bathroom 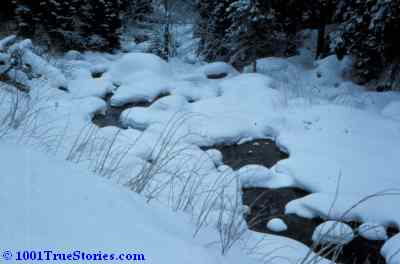 Well, it is no big deal – in summer. But the story I am about to tell happened in deepest winter: we climbed there for spending the New Year’s Night on 28th December 1991. Imagine going to the toilet outside while a steady icy wind, spiked with ice needles, is biting your skin, and imagine washing chest and arms... brrr... with snow... The well was deep down in the snow and we were glad we could get some drinking water from it. Snow was easier to use for washing.

Usually during winter the chalet is closed, only for the time around New Year's Eve having the tenants in there. By then, every year about 75-100 people from Romania or (East) Germany gathered for celebration. But summer 1991 the chalet tenant had spread word among mountaineers that there would be nobody there for that New Year’s Eve.

The reasons must be connected with the tremendous work such an endeavor means: everything has to be carried up during summer by donkeys: food, wood to cook it, and for heating, everything. And then by end of December, again, all fresh food for all those guests, carried up by backpack, in the middle of the winter. (Or pay an helicopter? Why not. There is a helicopter wrack on the path to the chalet...)

During winters the chalet is however closed but not locked. There are hard-boiled mountaineers who venture on a winter ridge hike and they may count on the shelter offered by the chalet.

We decided to climb anyway. We, that is a groop of students. I was already studying Japanese at the University of Vienna, but I was there with older friends [of friends] from my Romanian studying time. All, as passionate mountain hikers as I was. We were addicted to beauty like below.

From Tarata Peak (s. first photo) to the valley beyond it, in winter it looks like this 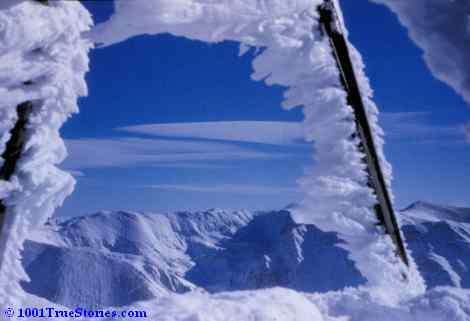 Well, this trip in 1991/192 : the New Year's Eve was gone by now, and people started to go down, back to their jobs. We were students, hence allowed to skip the first days of "work". So we decided to do so. The weather had just change to a stable wonderful one, with bright blue sky and strongly shining sun. Not the least of the reason was that we were sorry for all our food provisions we had painfully and painstakingly carried with our own back up through the snow which, in unbeaten path, could be up to the waist. 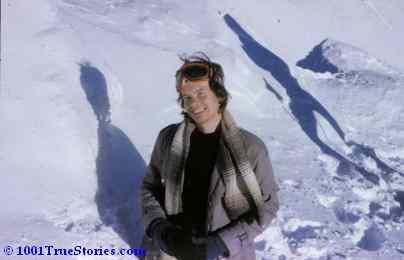 And now, to carry it back...?! Among mountaineers it's customary to leave unused canned food behind. But we were unable to leave it all there. We were sorry for the money and our effort.

Believe It Or Not, Real Ghost Stories Might Be Indeed Real!

Mine it is for sure.

So. Finally arrived at Day D. The day when we bad farewell to the last hiker with whom we had spent the New Year’s Eve. We sang them the not quite printable hymn of the Turnuri Hut, and turned on our heels back to ours.

Ah, yes, Turnuri Hut is the one just below Podragu, situated already in the fir-tree forest. It takes in summer maybe 2-2.5 hours up and 1,5 hours down, in winter anything around almost one day up and some 4-5 hours down.

Our room had a pallet bed, a platform stretched between three walls able to accommodate at one level the 6 of us. There was a tile-stove in there, but there was no wood to burn in the whole chalet. So we hoped the mountaineers rule "7 people make up for a stove” would work and chose of course the upper platform. The assumed maybe 1 degree higher temperature could mean in those condition a tremendous 100% improvement...

Snow and ice-covered boulders. But look at the sky too, it's REAL!!! 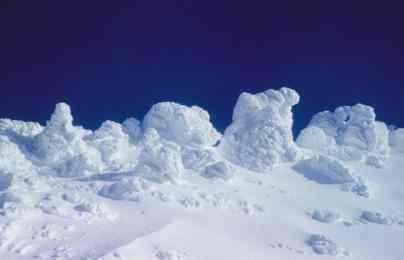 Some time at night I woke up because of the noise coming from the corridor ending in our room. Whack-whack. Whack.

I was two times really afraid in my life. This is one of them. All the thoughts in my mind had in the background the increasing feeling of fear, animalic fear.

It was a pretty loud one, as if something heavy, like some wood pieces we’d so dearly like to have had, were hitting the wooden ground.

The main gate was two doors away. I thought, maybe some very late extreme mountain hiker (s), climbing down from the ridge above, must be very happy he did reach alive the Podragu Chalet and is / are now taking off the ski-boots.

Doing the ridge... by skis? Hm.. who knows, crazy people are everywhere.

Signpost (uses to be, in summertime). The sky is real also here. (NO Photoshop!) 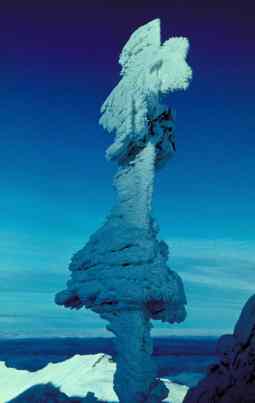 Or maybe very hard boots? But why don’t they speak a word? Then it’s only one. But how many legs does he have?

I was listening the noise and was looking forward to hear it end and the people outside entering one room, at last. But no.

The fear grew and grew, seeing that there was no change whatsoever.

And then I heard the German in our group saying Da ist jemand, There is somebody (out there). Thanks God I was not really alone with that noise!

It turned out that 5 out of 6 were awake. They have heard the German, who in turned had probably noticed by my breath or fidgeting that I was awake. I have realized that they all have shut up in order to  save the others the torment they were also experiencing. I was impressed by their dedication. 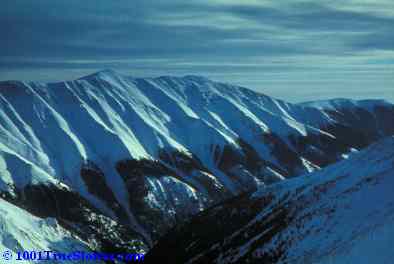 After maybe half an hour, or maybe only 20 minutes, another noise appeared. This one was outside, at the wooden window shutter. We knew they were opened because during the day one of us has checked something about them.

It was also a kind of whack-noise outside. And it was un-related to the wind squalls. The noise was not coming from the wooden blinds’ movements in the wind. We talked in a law voice so that the 6th one doesn't wake up. We made all kind of suppositions. The best was about a supposed animal from outside, sneaked through the few centimeters of the two doors left ajar because of the snow preventing them to properly close. But what object was that supposed animal playing with? There was no loose object in the corridor, we knew that – and saw it again in the morning. An animal from inside the chalet, like rat or so? Again, the noise was coming from a hard object or hard part of the body, like a big hoof or so. Or in boots. The Puss in the Ski Boots?!

A wind inside the corridor? Again, there should be some moving part in the corridor. And there was nothing. Just barren wood.

A young men looked for his electric torch and decided he would go out and open the door. His girl-friend almost shouted her NO!!!

I don’t know how much it took to the others to fall asleep again. It is amazing how we humans get used to anything, including terror. This kind of deep-rooted fear I have lived only twice in my life. Somehow, after altogether less then an hour, I was sound asleep again. The noises were stereo, on the right from the corridor and on the left from outside the window. The noises stayed the same all the time I had heard them. No third noise appeared. At least not until I did manage to fall asleep - and then it didn't matter anymore.

Closer view of Podragu Hut. Our window was the lower one, on the left - the one checked during the day by one of us. In the morning there were only his footprints in the snow. 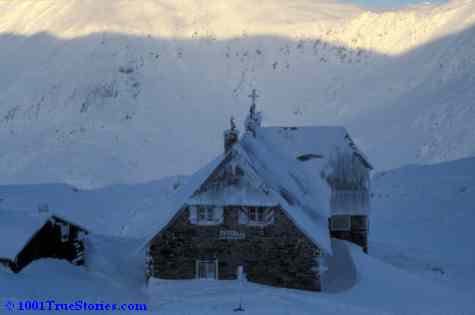 Packing. Speed? Wow. Speedy Gonzales. We suddenly didn’t care anymore that we had to carry so much food back. We left the cans, and there we fly.

I forgot when I have heard that, one or two years before, somebody actually died there doing a „trousers brakes” descent. That is, just sitting down on the snow and gliding downhill. That’s the basic sports there we also enjoyed so much.

Podragu was and still is my favorite mountain hut. Starting with December 1986 I had been some 4 times there, until that January day in 1992. And never since. Would YOU go again there?