Superstitions about a Mountain Dwarf Proved to Come True

The Story of Maria’s Uncanny Death

Maybe you do have your superstitions. Maybe you think they are silly. Read this first and then - I don't know what then. In this so strange story there is not only a superstition involved, but also a mountain dwarf. A real dwarf, like those from the Snow-White's fairy tale... But not so nice. I trust Maria fully. I know her story was true.

Maria had a crucial importance in my life. Not only because I think her as having been my best friend, a kind of soul-sister. But also because she helped tremendously my husband and me with our son. By being in the right moment in the right place she could give us the solution in the strange story with our son waking up in the night and acting weirdly.

Here you may read another strange story involving her life mission.  The weird story below is a tragic end one. It will be for many of you an unbelievable story but I put up with it. I know Maria was a very upright person who wouldn’t lie: not only at me, but generally.

As she was a little girl she lived in a town at the foot of the imposing, legends-wrapped Bucegi Mountains (slightly over 2500 m), two hours drive from Bucharest. One of her neighbors, Vlad, had a big toy car, big enough to actually drive it. Already at 3 he was coming sometimes to her in his toy car to drive together to their outdoor games.

They grew up as best possible friends. As experienced mountaineers they both have even had the occasion to save the life of each other.

Growing up she become a wonderful girl. As I met her she was already a charismatic young woman, with her pure soul written in her eyes. Given her strong character, her inner strength, her knowledge and her great physical abilities (like being a good extreme skier, and generally top fit), and, in spite of everything, very feminine also, everybody liked and appreciated her.

Considering all this and also that those high Bucegi mountains grew almost in her garden, there is no wonder that she had been the only girl accepted by the guys from the Alpine Rescue Service “Salvamont”. They treated her as being one of them.

I first met her in the Retezat Mountains, other legend-woven mountains of Romania. We instantly noticed how similar we looked alike: as if we were sisters. And then how similar we were also in our souls. We even shared, to some extent, similar destinies.

She died in December 2006, may God rest her in peace. In April I had un-emigrated with my family from Vienna to our home country, Romania, and one of the reasons I was very happy about was that now we could see each other more often.

In that summer she told me that Vlad had just died. Shocked, I learned also the strange story of his death, beyond the car accident which took his life.

About May I think, 2006, Maria and Vlad had hiked in the Bucegi Mountains, without taking the cable car. They were on foot on a mountain path through the forest when Vlad suddenly grabbed her shoulder and cried out "Look!" His other hand was showing toward a bush before them, some 10 meters away.

When Maria located the bush, it was still moving as if somebody had entered it. She also told me that she fancies having had seen a blur of something moving into it, but she couldn’t say what it has been. “Have you seen the dwarf?” Vlad asked her immediately. “NO, what dwarf?!”, she asked in disbelief. “THE dwarf?!”

The superstitions of the local legends contained many weird stories about elves and dwarfs and other supernatural beings which could be sometimes seen while hiking in the mountains. The superstition about that dwarf was saying that he doesn’t like that somebody sees him. And that he takes away with him in his world the person who does…

It was August when Maria told me “Remember Vlad? My childhood friend, the one with whom I didn’t want to have a doll? He’s... he's dead now…”

…He had been late in the night in a bar, drank something, and then, for some reason his friends couldn’t understand, he wanted at any costs to go alone to another pub. He obstinately rejected the friend who wanted to accompany him to drive the car. And on the way to the other pub there was a truck which…

I was shocked. Both for the issue itself and for her grief. I knew how deep and strong their friendship was.

But I also had to admit, in my selfishness, that I was glad that the dwarf had chosen him and not her. It was also somehow “right” so, if you can call this “right”: Vlad, not Maria, have had actually seen him.

It seemed however that the dwarf didn’t know that Maria hadn’t really seen him. In December she took her also… Another car accident.

To top all these I must also mention Maria’s mother. Here is the story about the bad omen she had the Thursday before. Sunday evening our so dear Maria was gone… 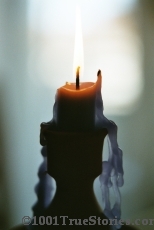 May God rest you in peace, Maria. You were as pure as the snow you loved so much.

... Go Home, or to any of ALL the STORIES in Sitemaps – Overview