This bad omen´s story about Maria´s death has been mentioned here. Remember? That story was about the mountain Dwarf superstition which unfortunately did come true. (If you know already there is no such thing like mountain Dwarfs, please, do read that story before this one. My maybe best friend ever has been taken by one while in her mid 30´s.)

Maria would have become Romania´s first doctor in snows. After the big political shift in 1989 there were many things to be changed in this country, and she overtook its ecology. She was very much “green” while other people barely started to learn what´s that.

Maria was not only beautiful as a "design", she was a very charismatic girl too. One would trust her the very moment one saw her. Good for the country: she got indeed sponsorship over sponsorship from all over Europe, helping her (first clean up then) modernize several Romanian National Parks.

She also did great and utmost necessary things like introducing the Avalanches Warnings in the radio and TV news in winter. Or making the avalanche map of Romania, so much missed by mountain rescue services, ski resorts, hikers and other people.

(I have another story about this her work which she saw as being her life´s mission. She had learned about it in a weird way, but about this, later on.)

That unfortunate Sunday on December 17th 2006 when she had that car accident, she was returning from a course. As I have just said, she was THE Romanian authority in snows. Her week-end course (or was it a conference? I forgot…) was about avalanches, and was held for mountain rescuers, I think. In Prahova Vallley, THE ski resorts area in Romania some 2 hours drive from Bucharest. 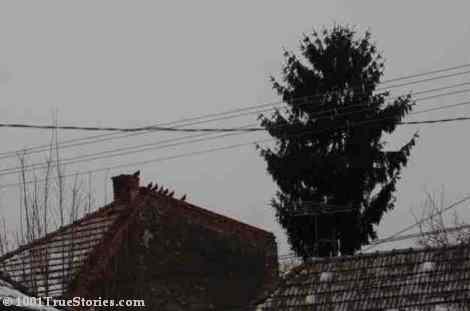 The course (or conference) began on Friday. Maria was actually born in Busteni, one of the ski resorts in that Prahova Valley. Her mother was still living in their house in Busteni, but Maria moved out to Bucharest: first because of her studies, then because of her work.

On Thursday 14th, before Maria started the eventually fatal journey, her mother phoned her in big distress. A bird had entered their house, flew disoriented some minutes around, bumped into things breaking a china vase (which, unlike glass, is also said to bring misfortune) and causing some stir. Her mother implored Maria, desperately, to cancel her whole journey.

How could she cancel her course (or conference), having been organized for quite some time?

How can you cancel in the last minute such a larger-scale event, only because your mother calls you and says a bird had flown into your birth-house?, in those very few minutes she was aerating the rooms?

Yes, this superstition is very well known by, I guess, everybody in Romania. Such a bird means death. But, come on, Mom…

Now, afterwards, we all know she would have better obeyed, no matter how weird it had sounded.

A really great girl, Maria. There is a saying in Romanian: "Good people are loved also by God". [... meaning "Hence He takes them to Him…"]

May He rest your soul in peace.

... Go Home, or to any of ALL the STORIES in Sitemaps – Overview