Our Journey from Atheism to Faith, 1/2

One doesn’t need to have had studied Maths or Physics to know that the amazing strange coincidences I am about to tell you have practically zero chances to happen. I’d be very much curious how you would have reacted in the same circumstances, if you were me. These coincidences which changed my life have practically no chance to happen – unless they are somehow directed by a third party. I’ll try to keep this so much true story as short as possible.

The row of strange coincidences started without me/us knowing it. With some parrot paper slips.

In older Romanian fairs (but also in modern ones), you may find an old oracle type: The so-called "Parrot slips". A box the size of a shoe box is filled with fortune-telling pieces of paper, larger than the somewhat similar Chinese fortune cookies. (If you stumble upon one when coming to Romania, take the chance! Some more stories about this kind of things in this section about premonitions, omens and prophecies.) The customer pays the fee, and a parrot sitting on the margin then chooses randomly a slip. 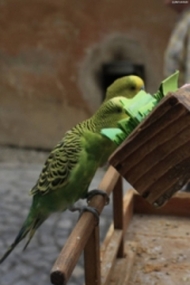 I chose one back in 1990 or so. It read among others "You will marry Dumitru”. "Gosh", I thought, "No way! Dumitru?!" This name belongs rather to long ago sunk a world, not anymore ours...

I have NOT married a Dumitru, but I hope you'll agree the paper slip is remarkable... You'll see. And 5 years later, my son's second first name :) became, with good reason, Dumitru.

Almost 30 years ago, at the end of my high school, I was a convinced atheist.

Fast forward to my study years on the University. Physics, as I said here. The grades we got were crucial for getting a good working place. The Mechanics exam and Special High Maths exam were the worse in the first year. I´ve learned everything minutely for Mechanics but I only got a 6 (with 10 being, in the Romanian system, the best grade). And I worked almost nothing for the High Maths one, but somehow got a 9!

Highly frustrated AND very glad in the same time, I have realized that, measuring my work involved, I actually would have deserved the vice-versa: 9 for Mechanics and 6 for Maths.

This was the beginning of me noticing there was something like a Conservation Law around: at work not only in Physics, but somehow also in the true life. I had decided God was actually the name people give to that Conservation Law I had so painfully-luckily just felt at work, and moved on with my life.

Then, on Oct. 26th 1988, my Mr. Right, with whom I had been being for half an year secretly in love, visited me to ask me, as directly as I write it here, whether I wanted to be his girlfriend.

And how dearly I wanted it!

This was also the start of a raw of strange coincidences which have hallmarked our lives.

Then I´ve graduated and the communist job system sent me to work in a school. Thanks to my good marks I "caught" a town school, but still, it was pretty far away: both from my home city, and even farther away from Timisoara, where Mr. Right was still studying.

For my mother however HE was far for Mr. Right-Son-in-law. So when he sent me a letter on my home address where she was now living alone, she hid it.

Unfortunately for her I knew that letter would come. But to search for it in a systematical police-like approach was pointless. If not for else, but because we hosted home more than 1000 books.

In despair, I, the atheist, have done what I hadn’t done in 22 years so far: I prayed. We had two icons of two Orthodox saints back home, and despite a whole bunch of negative feelings like awkward-ness, to name the lightest one, I’ve knelt for the first time in my life and asked St. Nicholas to help me find the letter. He didn’t help.

The second icon I then knelt before was St. Dumitru’s.

The very same day a poem which I used to know by heart came into my mind, but was not anymore able to remember one verse. I couldn´t get it out of my mind either, so I looked in our house library for the book containing the poem. Just behind that book my letter was hidden.

Through an interesting game of life I met, in that closed-to-foreigners-Romania of 1988, an Austrian: a pilot named Dietmar. I can’t help not noticing, first, his name´s similarity with St. Dumitru´s, and second, that my brother was by then studying and now he did become also a pilot. I guess also that made Dietmar a bit sensible about us. He helped me, after the fall of Ceausescu in 1989, to emigrate in Austria.

I was to learn soon after having started a new study in Vienna University that Austria’s National Day is Oct. 26th.

But I haven’t yet noticed the coincidence that it was the same day when Mr. Right had asked me to be his girlfriend.

So, as said, in autumn 1990 I had started studying anew, this time Japanese studies, when in October I went home in Romania to visit my mom.

In one of our talks she mentioned that something was due to happen until St. Dumitru’s Day. I felt irritated hearing this old fashion of dating events. How could she expect me to know when was that? Me, a city-child, still an atheist even if not anymore a 100% one? I already had highest respect for St. Dumitru who had so incredibly helped me with that letter. But I was still thinking religion was too “primitive”. My world exploded for the first time the moment when mom said...

It was my first real step toward becoming an active believer.

Some years later my relation with Mr. Right was gone and dead. For good, with nil chances to revive it. Again in deep despair, I knelt before St. Dumitru’s icon: “Please help me come together with him! If we do get married, the first child will have your name!”

The miracle happened, Mr. Right did change his mind, years later our first born was a boy. (There is a story about his birth, too. A true story, the type one tells with greatest pleasure on parties and gatherings.) With the greatest innocence I had entirely forgotten me having promised something Up There.

I was barely out of the hospital, it was evening. The next morning my ex-Mr. Right, now husband, had to go to register the birth since it was the last day for that. Something from my correspondence with him kept rolling in my mind, but again I could not recall it properly. Looking for the appropriate letter in the whole stack, I stumbled upon the letter where I was telling him about my plea to St. Dumitru and my promise to him. Right in time for the civil registry office!

Dietmar´s wife was visiting me when the first contractions of the labor pains started. “It would be funny if you gave birth tomorrow!" she said, "tomorrow it´s my birthday too!"

I did give birth the next day.

Years later there was again some problem between my husband and me. The Russian women who helped us, incidentally bearing a name almost identical with our daughter's, was born – how did you guess? – on Oct. 26th ...

Epilogue to Crown It All

The story has a crown, but I am not sure it is related to St. Dumitru. It could, since that event happened in later autumn, i.e. could have been around October 26th. But since

... I'll describe it in this separate story about our son.

I almost hear some of you suspecting me of missionary work, or embellishing, exaggerating or other ways of distorting. I don’t care. The whole story above is a true story. Naked truth, naked facts. If you believe it or not is your cup of coffee, having absolutely nothing to do with its absolute value of truth. (There are even more, further facts related to this date, but I wait the future to tell me what´s about those ones.)

Don’t you think it´s a bit too much for a sheer coincidence?

Oh, yes. Coincidence or not, the most important person in my mother's family tree was a Dumitru.

I do recommend you the „Crown", the icing on the cake: the weird event which made us become active believers. Our Journey From Atheism To Faith 2/2, i.e. the Uncanny Story With Our Son. The one which made us think...

... If a priest has THIS power, then, beyond all the flaws of the Church or her priests, there is something in it.

© Parrot slips photo with kind permission of the responsible person from www.amfostacolo.ro