Three and a Half Amazing Coincidences: Impossible Encounters

Deva is a city in the Western extreme of the middle of Romania :). Almost 60.000 inhabitants. One of them is Victor, a very good friend of my husband from the times when they were studying on the Technical University.

By the time this incredible but true story happened Deva was also situated well after the middle of our way from Vienna / Austria (where the four of us have been living since emigration), to my mother’s birthplace on the countryside in Romania. In that house she used to spend the summer and the neighboring warm months of spring and fall.

As I guess any grandma in Romania, she was more than eager to see and host as long as possible my kids, whom she was lovingly vying for with their other grandma. Hence the nephews were spending their summers by them, often accompanied by me. And my husband came from Vienna to visit us, when his work allowed the one thousand km long journey by car.

Because of our scanty time, a visit to the said friend in Deva, no matter how much of a dear friend he was, couldn’t usually rise past Priority No. 2 on our to-do-while-in-Romania list. We were stealthily driving through Victor's city and only veery seldom did drop by. Stopping in Deva was also stealthily, of course, and only for emergencies.

This was the usual background - and the situation in the day when we wanted to visit Sarmizegetusa Regia, the ancient capital city of Dacia, nowadys a.k.a. Romania. 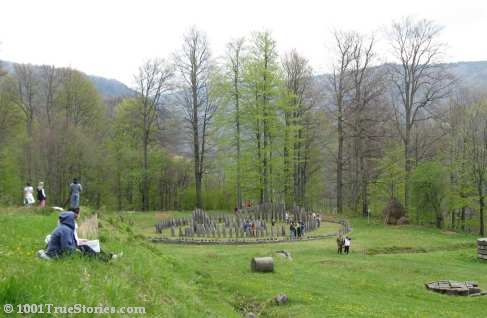 Sarmizegetusa Sanctuary, the „Stonehenge of Romania”
Photo below courtesy of www.romanianmonasteries.org 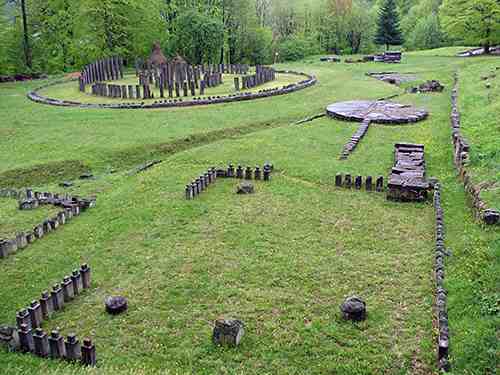 The sanctuary of the former capital city of Dacia. Dacians are the people who lived, 2000 years ago and before, roughly the same area like nowadays Romania. They were conquered, after wars spreading over almost 100 years, by Romans. Romans have occupied Dacia for about 160 years.

On the way to the mountains where these ruins were situated occurred the first, yes, amazing coincidence. 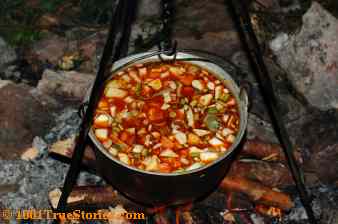 It happened because we needed a cauldron pot for doing the cooking in our wild camping in the mountains. Deva was the last chance to buy one. 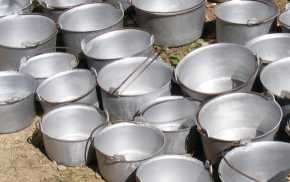 And just guess: who was passing by the man selling the cauldrons? Of course, Victor.

My husband felt very embarrassed. At least he could have phoned, like Hi Victor, I’ll be driving through Deva, no time, see you next time!

Do You Believe in Simple Coincidences?

Next time in Deva was also stealthily. My husband had to meet somebody who incidentally was also living there. Because he was driving and could not drink, the other person had decided they would meet in a coffee shop. Thanks to the parking angel I have also a story about, my husband even could get a parking place right in the front of the coffee-shop.

Now, the sidewalk was really large in front of it, 4-5 meters. Having had already the experience of meeting Victor in those 10 minutes of purchasing his cauldron, my husband had a bad feeling about the moment he would get out the coffee shop. He feared that the few seconds he needed to cross the sidewalk were too long, and was not reassured by merely computing the chances. He only could hope they wouldn't be.

They were. He was heading the car, parked five seconds away of him, and guess who was coming riding airily on the bicycle on that very sidewalk… ? Viictooor...

Do You Believe in Amazing Coincidences?!

And the next time they met it was my fault. (But I'm sure that even without me, they would have met later on, by some traffic lights for example…) Again, with kids having been previously "parked" by mom, we were coming from the somewhat unearthly Retezat Mountains with some other friends, in their car. 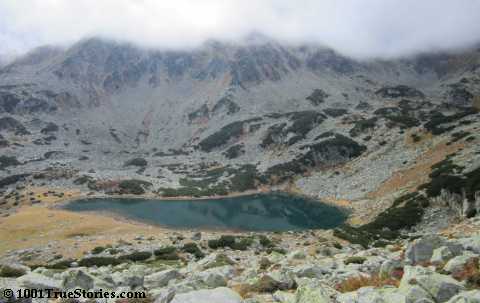 I am a big fruits fan, and apricots and peaches rank very high in my list. (I mean fan of REAL fruits, as we still have in Romania, with a taste exploding in your mouth. NOT their flavored plastic counterpart like the grapes down on this page, that we find in the western supermarkets that I knew by now so well, after so many years of emigration. )

On our way from the mountains, the first city to pass through was Deva. Coincidentally it passed right by the entrance of the fresh vegetable market where farmers bring their products to sell. I suddenly felt I really wanted some peaches. And my husband said "Can’t you wait until the next city, to buy them safely? I am sure you’ll meet Victor. And he'd be sad seeing that we hadn’t announced him that we'd pass by." 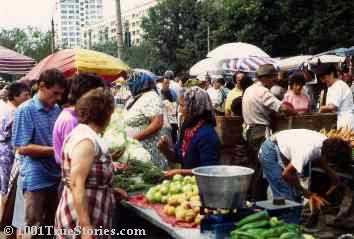 I got out their car in the parking place by the entrance of the marketplace and entered it. The farmer was already weighing my fruits – when I suddenly heard a familiar voice from behind my left shoulder going "Look who’s buying peaches in the city market of Deva…"

I had to bring Victor to the car to meet also my husband. They had both big smiles on their face, but with different feelings behind them… He wasn’t at all surprised seeing me showing up with Victor. And our friends in the car could now see, live, the proof that the story was true - if they've had any doubt at all.

The first question Victor asked him this time was How is your job doing?

It was the first time in those years, after they left the University, that he'd ask that. My husband indeed was in a big turmoil with the job, his department being about to be bought by another company. Nobody knew what would the future bring. And Victor had somehow felt his worries from afar.

We, my husband and I, were trying to cover it along the lines of The friends' car... not masters of our time… , feeling miserable that we were halfway lying to ease a bit Victor's thoughts. I mean, halfway a lie because it was not this the main reason: after the days packed with tents and rain and hiking we plainly wanted to get as soon as possible home.

“OK, OK”, Victor said… “But the fifth time you pass through Deva please do make a call. Even if for meeting half an hour, but do call!”

My husband knew it was a bit more than 5 times he had passed through Deva without calling Victor. Still he said…

“You mean the forth. This is the third time you’ve caught on me.”

“This is the forth. I've seen the back of your car this June, let me see, it was June 8th, at dawn. You were in the big blue round-about out there.”

Oops. We had indeed driven that June morning through Deva, bringing our kids to my mom for that summer.

If I was a mathematician I'd be delighted to compute the probability that these - I hope you do agree by now - AMAZING amazing-coincidences, happen as they did...

The cauldron picture courtesy of http://publicphoto.org