Radu had a training in a hotel in one of the biggest Romanian cities: about 400.000 inhabitants, including the students. The number is important to figure out how large the city is, and to realize that in such a city there is plenty of business hence plenty of hotels of any kind in it. This is also important. 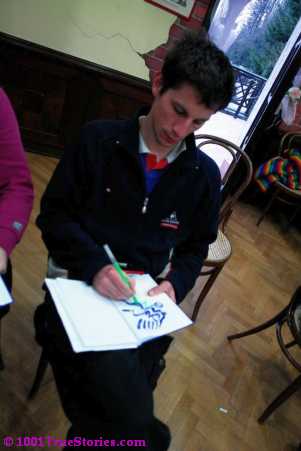 The Background for This Amazing Coincidence Story

The company that was offering the training, say, the huge HugCompany, had just bought the RED Company where Radu was working. And this led to RED Company split with its year long business partner, a German Company.

Of course the Germans were now upset, not only because the RED company hadn’t warned them about this change, but also because that meant losing big money. So that they decided they wouldn’t quit making business with Romania and started to ground their own branch. This one was supposed to overtake what RED used to do for them.

Easier to say than to do it. They needed not only really high professionals, but also able to speak German besides English, in a country where the national tongue is Romanian.

They decided to ground a new company, say NEW Company, in the same city. One important reason for that was that they plainly hoped to „steal” the employees from their former partners, i.e. those working for the RED company, since they knew them already.

The German Company was thus simultaneously in search for both people and location in this big city of 400.000 inhabitants. Hence the first job interviews, for lack of headquarters, had to be held in a hotel.

I guess you already have an idea what this story steers to...

Radu has been a manager of former RED now part of the HUG Company and was also partaking to this training. During the first day he got out the room of his training. He was erring on the corridors of the hotel, in search for something, when he saw an open door to a larger room. And inside it, impossible to miss, some posters and some desks with laptops marked with the logo of their former business partner: the German Company!

He was very familiar with those logos. For so many years they had belonged also to his life. There has been big fuss and much concern, prior to his company being sold to HUG Company, about how this German one would react. Should they expect the Germans trying to steal them the people? Should they hence make something to prevent this, like salary raising, or some legal schemes, or not?

The people in the room were Germans form the Headquarters back in Germany and they were preparing for an interview. They didn’t know who the guy outside the door was or that walls have years. He looked like a mere hotel customer passing by.

And exactly the moment Radu was approaching that room, one of the men at the table, sitting behind a laptop with the logo of his German Company (even if he was there to hire for the NEW Company) went nuts and exclaimed in a very angry voice, in his mother tongue,

"How can Brandler expect us to find here sixty people?!"

He might have been confident it was OK to say this: he was in a hotel room in Romania. Even if the door was open, the chances that that stray guy passing by does understand German in the first place, were low. Even if, where from should he have any idea, who Brandler is. They were in a hotel, during the week. People supposed to know who Mr. Brandler was, or be at all related to what the guy behind the laptop had exclaimed, were supposed to be at work in the very company they were now stealthily trying to pump professionals from.

A warned enemy is a powerful enemy