(which could have become a faux-pas)

Never talk about somebody assuming s/he doesn’t understand your language. Shit… sorry, I meant funny coincidences do happen sometimes.

I admit, this is a funny coincidence for us as Romanians. If you are American or German it will be rather difficult to sense it the way it felt for us. For you it will be only somewhat funny.

Romania is a developing country of 22 millions, struggling with everyday’s issues like To Have Or Not To Have the daily bread on the table. (I exaggerate, but not much.) There are Romanians affording to travel abroad, but in 1998, when this story happens, they were faaar less than now. Between ´92-´94 I've spent about one year in Asia. I haven't met any Romanian, and I was the first many locals or even tourists have ever seen live. We were still living in Austria by then, hence we could enjoy a Western standard of life. Travelling to odd destinations included.

And there we were, two young Romanian backpackers on our way from Kathmandu to Tibet in 1998. It was our second journey. The first one has been for the Everest Base Camp. Now Nepal was just for transit. 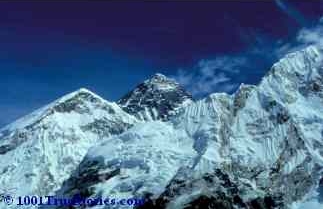 Everest in a moment of good temper... I meant weather

To get from Kathmandu on the road to the Tibetan border we took many trucks. Well, “road” is a bit exaggerated, but I won’t go here in detail. A picture will do. 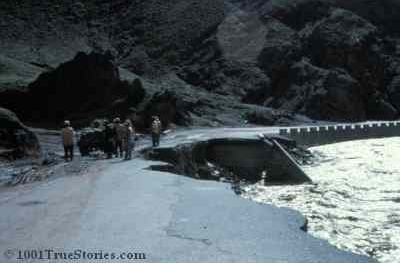 Al the trucks took us on their open platform behind, amid all the stuff they were carrying: garlic sacks, barrels, living poultry or slaughtered goats, building materials, woven bags with souvenirs, even canisters with fuel. Plus God knows what was all in the personal sacks of the Chinese, Tibetan or Nepalese traveling “first class” in the cabin of the truck. (Or also on the back, if the cabin was full.) 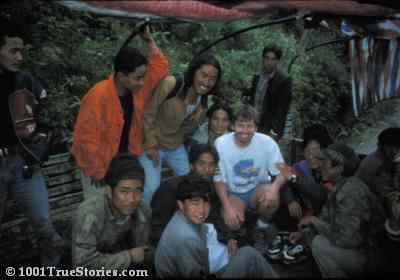 Hitch-hiking in Tibet: all the travelers on the truck´s back platform, Chinese, Nepalese, Tibetans, Westerners.

… We were allowed to pay for being tossed and turned around soundly in there. The truck was obviously not looking for its best way between stones and pits – why should it?

On our way back from Lhasa one of the barrels drove my attention. Big. Blue. Plastic. I fathomed having seen a red-yellow-blue flag on the address, our national flag. Since we were 9000 km away from home, we thought it could not be the Romanian, so I was curious to see what country was then. An all fours, between all the pits the truck managed to score, I somehow crawled to the two barrels. Lo and behold!, the address near the flag read Piatra Neamt, Romania! 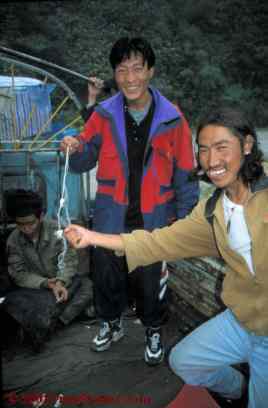 Unfortunately I have no photo of the barrels. I show you this one instead, because of the local flair. The Tibetan guy right is cutting with his knife a piece of threaded (!) cheese... (Do you sell cheese? I think it's a great marketing idea!)

Just imagine our astonishment. On the hmm… almost-road between Lhasa and Kathmandu there is one truck each 5 minutes. That any one of them would carry things from the so-far-away-in-time-and-space Romania was amazing enough. But that in the same truck there were traveling other Romanians too, that's a coincidence off any scale.

We reached the Chinese, sorry, Tibet-Nepalese border and I jumped off the truck. I was getting the backpacks my now-husband was giving me, when I noticed another tourist coming from the cabin of our truck and trying to climb onto its platform. The face could have been from anywhere, even Nepalese, but he was too tall for one. And definitely Nepalese don´t wear those trousers. They were typical for (European, not Asian!) backpackers: as if patched out of fancy bright colors. All possible colors.

I do like colorful, but even for me it was a bit too much. I was about to say to my husband-to-be with a Look at these trousers, would you wear something like that?, but something kept me silent.

Thanks God and all angels in duty! You’ve guessed it… Yes, he was also Romanian. I’ve found it out some 10 minutes later, while in the custom’s... errr... building. (Ruilding :) is more correct, it looked like having just survived a war.) I saw from afar his passport. It looked damn similar to my own. I drew behind him, and read: Constantin Lacatusu, Piatra Neamt, Romania! “Impossible“, I said loudly. He turned around in disbelief…

Ticu Lacatusu is the first Romanian on Everest and has also done all “The Seven Summits” of famous Reinhold Messner’s list, the highest mountains of each continent. He was now trying to reach on Cho Oyu (8188 m) solo, from its Tibetan side. 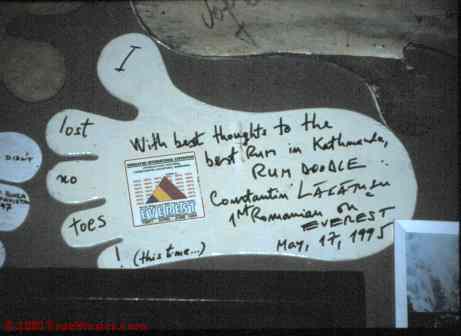 ... Sorry, Ticu. Greatest respect for your achievements; we also did enjoy the time with you in Lhasa, but I still believe those trousers were a tiny little bit too much…

Have I said it? Never ever talk with somebody else assuming s/he doesn’t understand your language. ... Funny coincidences do happen.