Home > Funny True Stories or School Stories > An Absent-Minded Professor: The Disappeared Car; The Appointment before the Main Lecture Hall

As stated here, a full "member" :) of the True Stereotypes Order of Absent-Minded Professors :) :) was definitely our Electricity Teacher in the University. In the following two funny stories I tell you the “hard ware” of the unintentioned "pranks" which our professor Ştefan played. 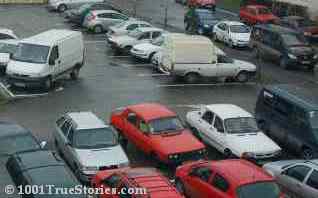 He looked on the window once, twice, three times… Suddenly he stopped, his eyes searching for something in that parking place, where the professor’s cars were dutifully lined up. He was searching something which apparently was not there. The missing something brought him a distress obviously growing on his face.

In a jiffy he vanished behind the room’s door, and gone he was. Five minutes, ten minutes...

After about quarter of hour he entered again the room, light on his face.

“I had forgotten… Today I came to school by the tramway…”

And next, what I think being the gem of the stories I know about true stereotypes of absent-minded professors...

The Nearly Missed Appointment before the Main Lecture Hall

Mr. Ştefan had to set up something with another professor of us, Mr. Boaru. For the discussion they have settled an appointment for 12 o’clock in front of the Main Lecture Hall of the University.

... Until Mr. Ştefan from one moment to the other plunged into the hurry-mode. He slapped his hand on his forehead as he suddenly remembered...