The famous needle in the haystack is not a fairy-tale. If you ask to find it, be sure it is given onto you: you will find it, some time. Even if you have forgotten that you’ve made that wish.

Lending books is a sure method to get rid of them. Even if you don’t want to.

And: there was a time in my life where I was very much interested in Astrology. (Don’t wrinkle you nose, allegedly even Einstein started to study it to prove it´s not true and became sort of fan of it.) 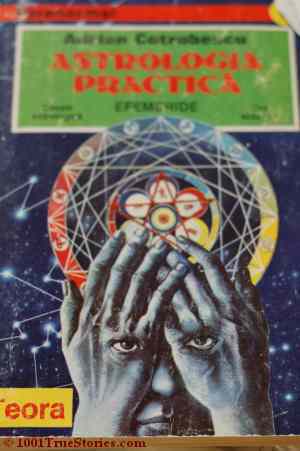 The book I had lost by lending. I show it here also because I like the cover. I find it interesting the way the artist found a way to illustrate the idea of seeing with the soul.

Well, I had a very good series of Astrology books, and I’ve yes, lent its first volume to somebody I have then lost the contact with. I had bought them in Romania, and we were by now living for ages in Vienna, Austria. We did visit from time to time our home country, but it became increasingly difficult to find a book having been published 3, then 4 then 5 years ago.

This figure grew with a vertiginous speed, and before I knew it, it became obvious that the book was gone.

On the other hand, growing older I also some time decided I had enough books. I could not read them at the rate I used to buy them. First shop I was visiting while in a new place was the bookshop.

Having discovered also how difficult is to move the home library while moving to new homes, no wonder that I had once decided Enough with books-buying. First read the about 1700 we already had by then. (I´ve started again to sin, we have now more.) 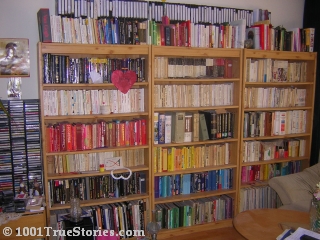 Sidebar: a Very Short Ask and It Is Given Story

Another "Ask and it is given" little story connected to this decision of me not to buy any book anymore happened when it was still active. I did enter a bookshop, for buying a present for somebody dear to me. Another book "glued" to my eyes and I felt the urge to buy it for myself - Anodea Judith's Wheels of Life. And that in spite of having several similar books home.

It´s only later I had found in it (and then thanks to it), the answer to a very old question of mine: are there two kinds of body fat? Yes, they are: hard belly fat and soft belly fat. More about this in this article.

... After having un-emigrated from Austria to Romania, maybe 5, maybe 7 years after having borrowed that book, I was passing by a second-hand bookshop in the city we are living now, when I felt the urge to enter it. A thought shouting to me Go in! I haven’t entered that shop for many years, obeying to my resolution not to, anymore.

You’ve guessed it. Yes, a copy of my book was the first thing I saw when I entered it, standing almost vertically on a heap of books on a „books-island”.

... I still do lend books. But now I have a notebook specially for writing down what book to whom. And when.


Ask and It Is Given: The Said Needle in the Haystack

As I said above: among the first shops I visit when in a new city or country is usually a bookshop.

We were in a longer visit in the UK in a town south of London called Tunbridge Wells. In the first days of our visit I took a long shopping tour – some 6 or 7 bookshops of the downtown. I was looking mostly the personal development area (but not only), opening book after book, reading large parts of text and usually deciding not to buy. I was so far away of our home in Vienna, I had to really take care of my airplane luggage.

At the end of that day I had noticed that there was a particular quote from a book which had stuck with me. The author was saying One of my favorite Chinese sayings is "until you are willing to receive what you give, and willing to give what you receive, you do not understand love." I had realized it is big wisdom in it and wanted to read more about it. So I wanted to buy that book.

I vaguely thought remembering it was on an a corner of an „island” of books and not in the shelves on the walls. And I knew that one phrase was placed about the middle of a right page, somewhere in the book.

With this scanty data you wouldn’t have tried to search that book, aren’t you? That’s too bad. Ask, and it is given!! I say it again and again:

Ask and it is given / answered:
In which book out of 6-7 bookshops have I read this phrase? 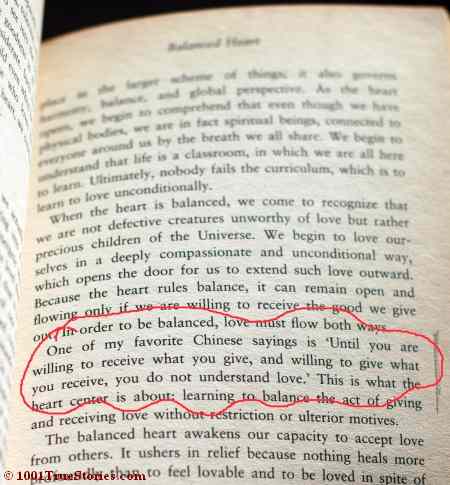