A True Gypsy Story: The Surgery

Have a wonderful Palm Sunday!

It´s Easter time. It means huge house work before Sunday, the 20th of April. And after Easter, it´s holiday!

IF I'll be able at all to work for my websites in the next two weeks, then it will be some cleaning up after having finally learned much of how to make a website.
Next article comes hence before Thursday, 1st of May.

If you miss my stories :) until then, you might be interested to discover my other site, Spiritual Intelligence Academy. Enjoy!

Oh, before I forget: Do check this site for my err... "Easter Egg" I´ll display soon, and you´ll have a little surprise.

Romania´s population is divided in two: the normal Romanians, who can be Romanians (90%), Hungarians, Germans and some Slavic variations - and gypsies. While "normal" people in the first category do mix with each other and are more or less homogeneous in way of thinking and values and so on, the gypsies are a group by itself. Also homogeneous, but only inside. They are a state in state. With very few exception nobody mixes with them.

Typical houses of wealthy gypsies. You dont´want to know how much they have begged in Western Europe, or even in Romania, for them... And this is the more "acceptable" occupation! Read further down for explanations. 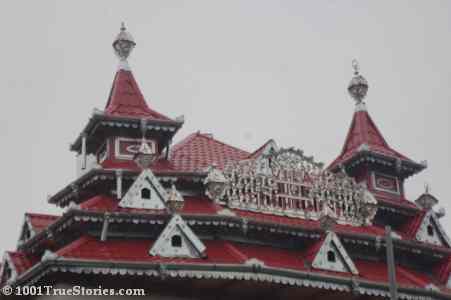 Right: a typical roof of a gypsy house

Below: 7 gypsy houses, under construction, and a "normal", Romanian or Hungarian one, in the outskirt of a town

Why should we. A gypsy family teaches the kids how to steal, to lie, to beg, to cheat, to earn money without honest work. There are exception, too, I know two gypsies worth the name Romanian. But the overwhelming majority of them ARE a plague for my country. No wonder they are not accepted by the society.

But they stick together and (un)behave like this only toward us, the non-gypsies. Allegedly internally they have a strict code of moral...

The even bigger problem is that they do make kids. Real Romanians have also a negative population growth. But not gypsies. I heard from knowledgeable persons that in many villages the ratio is 1-2 Romanians (or Hungarians or so) for 8-9 gypsy kids. We´ll have a big problem in some years.

I don´t care about being political correct. Given the way they are educated, THEY are a plague. Why should we accept this, in OUR country?!

The gypsies, came to Europe some time in the Middle Ages. It seems they originate in India, belonging there to the caste called "paria", the untouchables. It is the lowest caste. It seems that they had no good life there, since they emigrated toward Europe.

There is another kind of gypsies too, the nomads. They have no fixed living place but wander around in horse powered wagons. By coincidence it is the day before yesterday, i.e. Thursday, the 10th of April 2014, XXI century, that I have seen again such a gypsy camp - for the first time again in maybe 30 years!!!

... namely at the distinction between the two kind of gypsies: the petty criminals plaguing now also the richer Occident, and the "high class" :) of gypsies. These may be really wealthy. Many of them have a huge income out of activities like illegal money exchange, forging money, pirating all kind of products, having beggars and prostitutes work for them (... for that kidnapping kids and when needed cripple them in purpose...) and more recently drugs.

Back in the communist Romania gypsies had "a wire" to the Occident, controlling the illegal import of all kind of such products, soap, chocolate, blue/jeans, beverages… 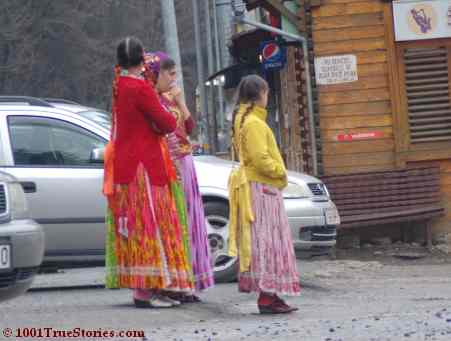 Gypsy women on a rustic parking place along the road. Either of the cars or both belong to them. The braids show they are unmarried. The gypsies clad this way belong to the "upper" class of gypsies, but they also stick to their (un)culture. Read the text above for an explanation of the brackets.

One such gypsy woman coming from their “upper” class had a complicated surgery around the time when communism fell in Romania. It all went well - now it was the time for the unofficial payment.

Why unofficial? In the communist Romania and some time after the medical assistance was state-run only, and officially for free. But no patient dared to take it literally. Each treatment had a price, which was to be payed either cash, for more complicated cases, or with different products - usually coming from the prohibited Western countries.

Her husband went into the doctor’s office and reached him a chocolate box. "Thank you very much, Mr. Doctor", he said in his raw, plain way, "we are very happy. Here you are, a little gift for you."

The surgeon stared at his present. His face displayed resentment. "It is very nice of you and thank you, but usually for such a surgery one brings 10,000 Dollars…"

He took back the beautiful chocolate box from the hands of the surgeon, opened it before his eyes, and took out some of the staples of dollars neatly arranged inside. He closed the box back and handed it back to the surgeon: