There was once a woman in Bistrita county, Romania – some 25-30 years before (that is, not long before the fall of communism in 1989.) Her husband was long since dead and she was living with her daughter. This daughter was about to marry, but money was scarce. The more so as they were living in a village, where there was not much of income possibilities. That’s why mom was commuting to the nearest city for her job.

Since making the wedding ceremony is a really expensive thing – usually on the countryside with up to 300 guests, the greatest number I had heard of being 600 people – they needed to borrow some money for that purpose.

No, this is not the money the woman in my history had borrowed. I only found the idea interesting. The chocolate coins might be well-known, but the chocolate bar is funny, In order to prevent being taken ... err... mistakenly from the store shelf, on the front side it's written "Attention! not to be given, but to be bought!" 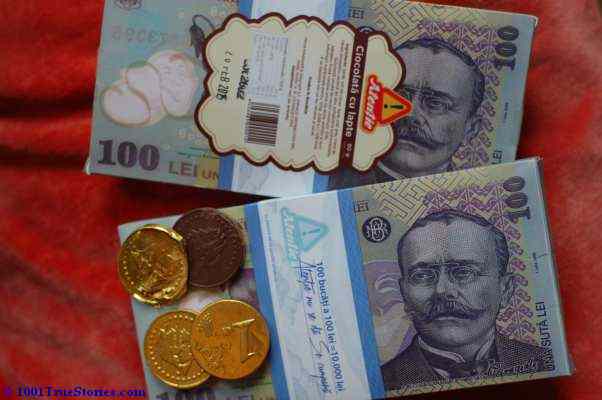 So there she was, mom coming by train from the city where she had borrowed 26.000 lei. To have an idea what that meant: it was one year’s income for a young teacher, doctor or engineer. Since the only bank-like institution in those days’ Romania was state-run and was not really a bank, she had the money from the countrywide Mutual Help system. This is a system with almost no interest where participants give monthly a certain amount of money. Monthly one of these participants comes at the receiving end. (By the way, in almost any institution there was another such local Mutual Help system, with lower money involved. I find it wonderful, this mutual trust of people... Thinking it over, it is because of our lack of trust that we all loose, and the banks thrive on our labor...)

It’s only when she met her daughter that she realized that the handbag with the 26.000 wrapped in newspaper, had left hung in the long-since left train... She felt like dying and started to cry with despair. Her daughter tried to comfort her – "Mom, it’s only money, I’ll get soon this work and I’ll also be able to get into the Mutual Help System, and borrow money for the wedding, and I’ll pay both installments back..."

Her mother was devastated, but somehow she did come to some peace.

A few days later she was in the city at her work, when she received a phone call.

"Have you lost something?"

Straight forward. No Hello!, no self introduction like "My name is..."

"No-no, I am serious, Mrs. Ionescu. Have you lost something? We might have found it."

It was the Police. "Militia", as it was called by that time. She had in her bag also some personal papers which made her easy to find.

"Yes, I did. My handbag with the money for the wedding of my daughter inside."

"We did find it", the officer said.

"Yes. They are all here. When can you come to take it?"

To fully document the chocolate money above: even the height of the money pile is a true copy of the original... 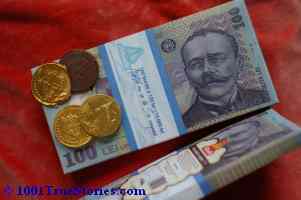 She couldn’t believe it. Soon she also learned what happened: a young girl using the same train found the handbag. She took it, brought it to her school, and gave it to her teacher at the begin of the class. This teacher opened it on the spot and, finding the big money, started to count them. And brought it to the Militia.

Do believe miracles happen, folks. Chances grow if you have always been a honest person, and if you yourself would have act the same!

After the big earthquake and tsunami 2011 Japanese Police received about 78 million dollars euro found under the debris and ruins by population... In the German news I have heard about 55 mil. euro.

There is hope for humanity.