If you asked me before 1990 whether do miracles happen or not, I’d have said something entirely different than now.

I was in my wonderful Brasov heading to the Austrian Embassy in Bucharest for some things involving my emigration . I was about to start studying at the Vienna University, and, I forgot why, it was tremendously important to be at the Embassy at 9 or 10 o’clock. I forgot that too.

... My dear aunt is a wonderful being. Soft, nice, helpful. She literally wouldn’t harm a fly, as the saying goes metaphorically. I made my schedule so that I may visit her and my uncle in the evening, and at about 5.30 or so next morning my train was leaving for Bucharest.

Have I told you my aunt is soft? She wouldn’t harm a fly, how could she harm me waking me up at horrendous 5 a.m.? I had told her it’s VERY important for me to be at 9 (or 10) in Bucharest, and went to bed... Only to incidentally wake up some 15 minutes before train’s leaving!!

Luckily the train station was not far away. But when I entered it, hardly breathing under my big backpack, I saw the train schedules’ former big split flap display of Brasov’s train station rotating it’s little flaps: my train has just left the station. I had only come right in time to see that my train had left from platform number 5! 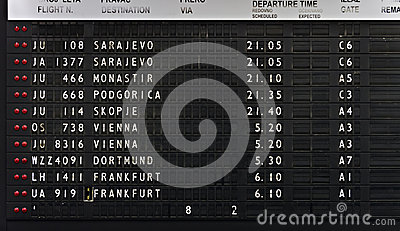 For other non-English native speakers like me, not knowing it, this free stock photo from dreamstime.com of a split flap display from Belgrade airport. I have asked yesterday my wonderful cousin in Brasov to take a picture of the original one. He went to the train station and he said it´s gone, now it´s electronic!)

I can’t tell you how important was to get to the Embassy – I have forgotten the exact reason why, as I said. But I do remember my despair. It was already daylight, should I now hitch-hike? It was the only possibility, since, that summer of 1990, so soon after the fall of communism in 1990, the intercity buses were still scarce. But it took maybe half an hour to reach the Bucharest hitchhikers' spot...

And then a thought somehow from outside entered my head. "Go to the platform. See with your eyes that the train is gone. Go.”

not so easy backpack on my back

arrived on the platform. 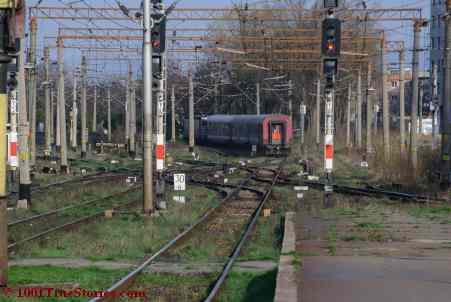 Looking in Bucharest direction – lo and behold!, my train had stopped some 100 meters away!!!

The first step was soo very high... I was now on the ground and not anymore on the station’s platform, this first step was way above my knee. And I had a backpack.

And then the door opened like in a dream, and the train’s conductor reached me his hand to manage that first step. And then the other two or three.

I tell you, folks, Miracles DO happen. I lived one. I’ll never know whyt made THAT train stop right after having already left the train station. I made umpteen thousands of railway-kilometers, I don’t recall something similar.

Why Not Giving Up IS Worth

Never ever give up. Go to the bitter end. You’ll probably fail 9 of 10 times. But you never know when that 10th time happen!!!

Oh, I re-live now the great, triumphant feeling I had climbing the few steps onto the wagon, and remember I had this conclusion some other occasion too. Some time later you´ll find here a link to my 2-in-1 eclipse story!